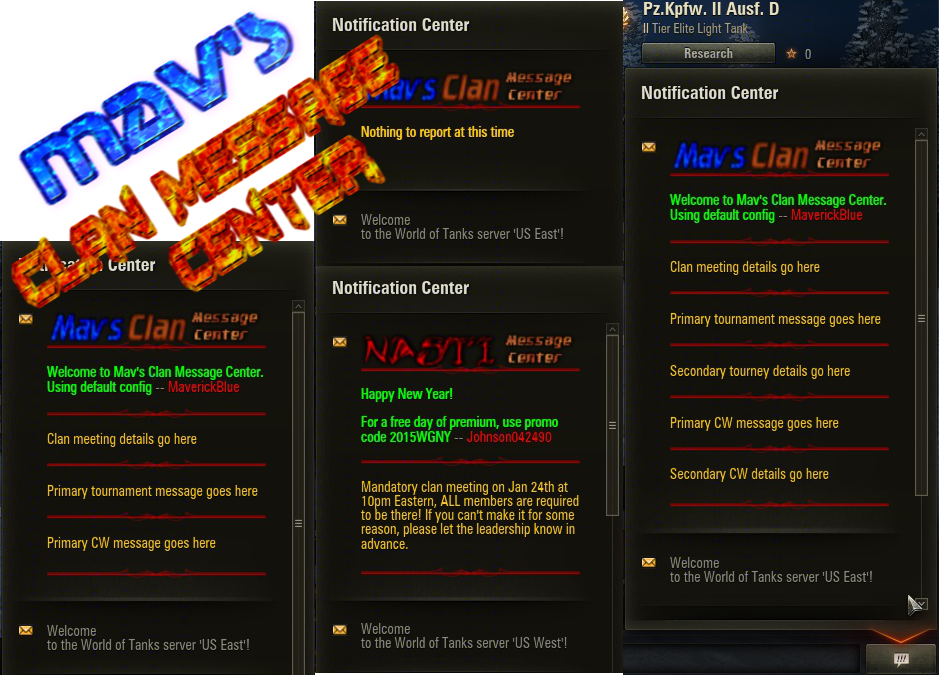 Well WG finally broke it. Unfortunately I hadn't had time until now to hunt down and fix which line of code they broke, but I finally did and now it's fixed. Hopefully they won't break it again.

However I haven't tested it for compatibility with the various different script loaders used by mods nowadays. It works great with the ones used by the mods in my pack, that may not hold true for them all tho. If you're having issues, try deleting the cameranode.pyc and/or __init__.pyc that I included and using just the one used by your mods. If your script mods locate __init__.pyc in a different folder, try locating the main mod files in that folder instead. Again, I haven't tested this mod against the various different scriptloaders, however these steps have helped me resolve errors between other script mods I use.

I've been thinking about updating the mod a little more, considering tournament battles are no longer a thing, and strongholds are. Perhaps I'll just rename the fields, but I'd like to make it more extensible. So for instance, different groups of people that like to run strongholds together, such as daughter clans or just plain random groups, could just share their custom config files among their various groups, and the mod loads them all, instead of the files having pre-designated names. That kinda sounds jumbled. So the idea is group xyz makes a config and names it xyz.xml, and gives it to all their buddies, and group abc does the same. Group xyz can't see group abc, and vice versa of course, unless a player has both config files in their mod folder. Right now the config file names are hard coded, so this isn't possible.

I'd also like to re-package it in the .wotmod format, which in the short-term is what you'll likely see first, as it should require far less code rewriting, and should eliminate potential compatibility issues with different cameranode.pyc and __init__.pyc files. Not to mention it would be fully backwards compatible out of the gate, other than moving the config files to a different folder.

Tired of chasing after clanmates to let them know about meetings, clan wars, tournaments, etc? Can't get your members to sign into a clan forum? Do your members skip over teamspeak host messages out of habit, or just plain forget to pass messages on to others? Even if you answered no to all of the above you may still find this mod makes things conveniently simpler, because now you can send notifications directly through the game upon startup.

When signing into the game, at the top of the notification center(the menu that opens when you click the little button in the bottom right corner), a list appears of all the messages you want your clan to see. Optional fields are MOTD, clan meetings, tournaments, and clan wars. Any and all fields can be disabled, and if you'd like, optional secondary tournament and clan wars messages can be enabled if you want to segregate control without giving access to higher ranking clan messages(everybody has been in that one clan with more drama than a soap opera...).

You need a webserver to host the configuration files containing message details to broadcast in game. If you don't have one, you can use pastebin.com or a similar service. If you're using remote header/divider images you will need a direct link to the image files. If you don't have your own webserver, imgur.com works well(ex: http://i.imgur.com/xSH9YWB.png).

Wrath of the Gods