Have you ever said "I don't want to live on this planet anymore"? Now you can! We at Kerman & Kerman Orbit and Surface Structures are proud to present you the all new product line for Kerbals who want nothing more than to live on another planet!

This mod adds several new parts that are designed to be used in a planetery base for the Kerbals. This includes Habitats, Greenhouse, Laboratory, a Cupola derivative, Command-Center and others. It is designed to fit with the other stock parts and feel als "Kerbal" as possible.

Please use the Forum Thread for questions or to report any bugs!

Since many have trouble installing this mod, here is a short description of the important steps and pitfalls:

it MUST always be:

To be sure you have the right folder structure (it is strictly needed for this mod to work) compare yours with this: 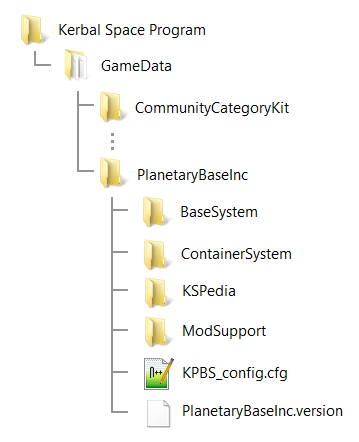 You need ModuleManager to use the supported mods!

Español by Rafael acevedo and fitiales

Deutsch by Nils277 and DasSkelett

If anyone is interested to translate KPBS into Japanese

, Italian (in process)  or Brazilian Portuguese

You can find all the texts that need translation here: KPBS Texts. (5916 Words)

Important: Please contact me before you start with the translation. It already happend more than once that multiple persons worked on a translation for the same texts and therefore their efforts were in vain.

The source code is available in GitHub